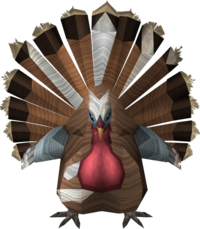 They always drop normal bones and either a raw turkey or, less often, a raw turkey drumstick. As an even rarer drop, they also drop cornucopias. The Give Thanks emote could also rarely be gained from killing them during the 2013 event, causing a message saying "Congratulations! You've unlocked the Give Thanks emote for aiding in the Thanksgiving slaughter." to appear.