From the RuneScape Wiki, the wiki for all things RuneScape
Jump to: navigation, search
The Old School RuneScape Wiki also has an article on: osrsw:Anger mace
Anger maul? (edit)

An anger maul is a weapon that can be used only during A Soul's Bane quest to kill the Angry giant rat. Its maximum hit is 2,000, but the player doesn't receive any experience when using it. It is found in the rage room's weapon rack. As with all Anger weapons, it can't be taken out of the dungeon without using a glitch and only one Anger weapon is obtainable at a time. The cosmetic override for this is rewarded at the completion of the quest.

Zamorakian Spiritual Warriors in the God Wars Dungeon also wield a weapon that is identical to the Anger maul. 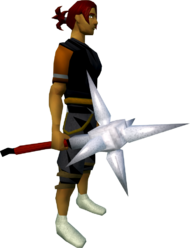