From the RuneScape Wiki, the wiki for all things RuneScape
Jump to navigation Jump to search
Loading...
ItemScenery
Item JSON: {"edible":"no","disassembly":"no","stackable":"yes","stacksinbank":"yes","death":"alwaysinclwild","name":"Ancient relic","bankable":"no","gemw":false,"equipable":"no","members":"no","id":"40196","release_date":"31 May 2017","restriction":"microtransaction","release_update_post":"Smashing Relics","lendable":"no","destroy":"Are you sure you want to destroy your Treasure Hunter prize? You cannot reclaim it.","highalch":false,"weight":0,"lowalch":false,"tradeable":"no","examine":"Smash this priceless artifact on the ground to find hidden relics of the past inside!","noteable":"no"} 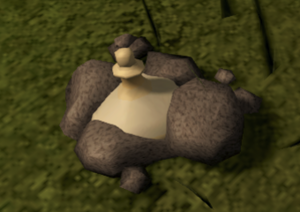 Ancient relics are exclusive rewards obtained during the Smashing Relics promotion on Treasure Hunter. They can be smashed onto the ground to obtain rewards within, which include a medium cash bag, and a random reward like gems, prismatic lamps, and former Treasure Hunter and Squeal of Fortune items.

During the promotion, members can also receive up to two ancient relics per day by finding them partially buried in the ground in various places. Ironmen, however, cannot pick up these buried relics, and instead receive the message You're unable to interact with this relic on an ironman account.. Once two relics have been picked up, players cannot see any further relics until reset.

Partially buried relics can be found on members' worlds in the locations listed in the table below. The relics do not appear on the minimap, and there are no requirements to obtain them (aside from the restriction on ironmen). As the locations vary by world, and also change each hour, not every location listed will currently have a relic. Multiple relics can spawn per hour.

A player smashing an ancient relic.

Upon smashing an ancient relic, the player will always receive a medium cash bag and one additional secondary reward from the following table.