From the RuneScape Wiki, the wiki for all things RuneScape
Jump to: navigation, search
The Old School RuneScape Wiki also has an article on: osrsw:Amulet of Glory (mounted)
This article is about the amulet of glory when mounted in a player owned house. For the equippable amulet, see amulet of glory.
Required materials: 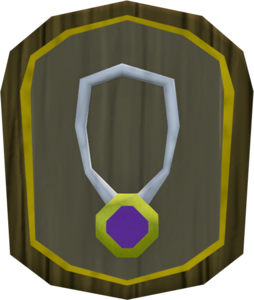 A mounted Amulet of Glory can be built in the guild trophy hotspot of the Quest Hall in a player-owned house.