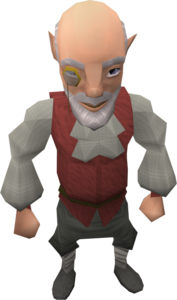 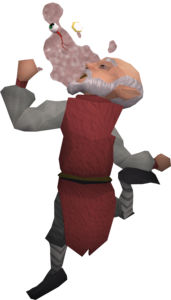 Ambassador Ferrnook is the ambassador of King Narnode Shareen of the Gnome Stronghold to King Roald of Misthalin. He can be found on the 1st floor[UK]2nd floor[US] of Varrock Palace in Varrock, usually by the stairs in the room with a training dummy. You may deliver food to him during a hard order of the Gnome Restaurant minigame. He is the cousin of esteemed gnome scientist Master Peregrim.

Ferrnook has been sent to Varrock for unknown reasons, although it is likely that he is trying to strengthen ties between Misthalin and the gnome people. Recently, the gnomes have begun to establish ties with many nations, including Asgarnia, Kandarin, Misthalin, and Keldagrim. Varrock's importance as an economic and military hub is likely appealing to the gnomes, who are currently locked in a battle with General Khazard.

Despite having spent some time in Varrock, Ferrnook has yet to gain an audience with King Roald, who has been busy in recent times. However, he says he is enjoying his time in Varrock; although he misses gnomish food, which he can ask for in the Gnome Restaurant minigame.

The amounts of the rewards are incomplete and are being updated with the variable range of the items given.

This information has been compiled as part of the update history project. Some updates may not be included - see here for how to help out!
Retrieved from ‘https://runescape.wiki/w/Ambassador_Ferrnook?oldid=35722181’
Categories:
Hidden categories: