From the RuneScape Wiki, the wiki for all things RuneScape
Jump to: navigation, search
"Ancient Altar" redirects here. For the altar that is used to switch to ancient magics, see Jaldraocht Pyramid.
Altar of Zaros? (edit) 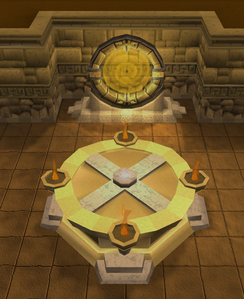 The Altar of Zaros can be found under the Varrock Dig Site, inside the Senntisten Temple after The Temple at Senntisten quest. Players can change their Prayer book into Ancient curses and vice versa.

When a player prays at the altar, it restores their Prayer points and gives a +15% prayer boost over their current level, similar to the way the Altar of nature in the Nature grotto, after Nature Spirit, and some others boost the prayer points by 20 above their current level. Given that the requirement for the quest is level 50 prayer, using the altar to boost prayer would increase the available prayer points by at least 70 points. At level 99 prayer, one could boost ones prayer to 1130 prayer points using the altar, or 1138 if one uses the "boost" on the Prayer Skillcape.

The update history project is a work-in-progress – not all updates to this topic may be covered below. See here for how to help out!
Retrieved from ‘https://runescape.wiki/w/Altar_of_Zaros?oldid=31998921’
Categories:
Hidden categories: