From the RuneScape Wiki, the wiki for all things RuneScape
(Redirected from Altar of Nature)
Jump to: navigation, search
This article is about the Prayer-boosting feature in Mort Myre Swamp. For the means by which to craft nature runes, see Nature Altar.
Altar of nature? (edit) 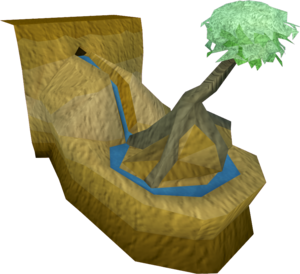 The altar of nature is a special altar boosts Prayer points by 20. This is one of three altars in RuneScape that will do so, the other two being located in the Monastery of Saradomin and Seers' Village (while wearing the seers' headband 3). The altar is restored from a corrupted state when Filliman Tarlock's grotto is reinvigorated at the end of Nature Spirit. This grotto is located at the southern end of Mort Myre Swamp, through a door on a small island accessible only via a bridge from the south.

An empty druid pouch can be found in the chamber, on the floor next to the altar itself. In order to bless a silver sickle, it has to be used on the altar. Nearby the altar, a Summoning obelisk can be found, where items and shards can be converted into pouches using the Summoning skill.