From the RuneScape Wiki, the wiki for all things RuneScape
Jump to: navigation, search
The Old School RuneScape Wiki also has an article on: osrsw:Blood altar
AltarStrange stones? (edit)? (edit) 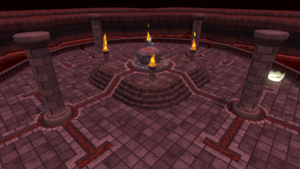 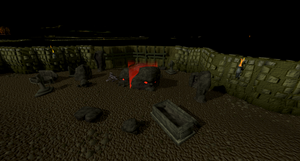 The Blood Altar may be found in the Blood Rune Temple in Meiyerditch Dungeon after completion of the Legacy of Seergaze quest. It is used to craft blood runes from pure essence, providing 10.5 Runecrafting experience.

The fastest way to get there is to use the wicked hood's teleport, which provides two daily teleports to the altar (3 if the entire wicked robes has been purchased). Alternately, break a blood altar teleport, obtained from The Great Orb Project, or purchased with runespan points. Both these methods land just outside the altar.

Players can also gain access via the Abyss by banking in Edgeville then running north to the Mage of Zamorak, but this requires becoming skulled and running into low level Wilderness, so player killing is a risk. This method places the player inside the altar. Alternately, players can use the Drakan's medallion (to save a charge teleport first to Morytania with the ectophial) to teleport to the Meiyerditch Laboratories then run south and west through the nearby dungeon to the altar. This takes slightly longer but doesn't run the risk of player killing, and the medallion can be used to bank at Burgh de Rott. The Blood Altar is considered to be outside of Morytania which means teleporting via the medallion within it will consume charges, so it is advised to either exit the altar first or recharge the medallion at Burgh de Rott.

Players who can't access Drakan's medallion and who either can't or don't want to use the abyss or the Great Orb Project can also reach the blood altar from the trapdoor behind the Hair of the Dog tavern in Canifis. Enter the cavern containing the tomb of Ivandis and take the other exit. This route is not commonly used by runecrafters as it is much slower than the other options.

The maximum likely limit for crafting Blood runes in one visit is 266, if not using Morytania legs 2 (which grant 10% chance of extra blood rune per essence). This would be achieved by having 90 Runecrafting, and carrying 266 essence to craft (23 in the normal inventory along with 48 in the 5 sizes of Runecrafting pouches, along with 175 claimed from the wicked hood (if all the Wicked robes have been purchased), and 20 from the abyssal titan summoning creature). The maximum possible experience is 2,793 obtained while doing the above.

A blood tiara may be created at this altar by having a blood talisman and a normal tiara in your inventory. The player must use the tiara on the altar. Doing so will earn 52.5 Runecrafting experience.