The Alchemiser mk. II is a machine that can be built in the Invention Guild basement at level 108 Invention. It automatically casts High Level Alchemy on the items put into it, even while the player is offline. In order to make this version, you need to have first built the Alchemiser.

Every hour, on the hour, the Alchemiser mk. II will process up to 25 items deposited in it, consuming up to 150 machine charges, as well as a nature rune per item. Building it requires 55 of the power allotment supplied by the generator. It can hold up to 5,000 items over the three input slots along with 5,000 nature runes. Researching the Alchemiser mk. II blueprint awards Invention experience.

Once the Alchemiser mk. II has processed some items, the resulting coins may be withdrawn via the machine management interface. However, no Magic experience is awarded. Alchemiser mk. II cannot alchemise items with a value above 500,000. 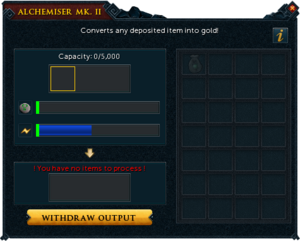