The Al Kharid palace is the residence of Emir Ali Mirza and the seat of government for the emirate of Al Kharid. The Emir lives here with his parrot Khoochak, who, after Stolen Hearts, can give players a story recap of completed desert storyline quests. Grand Vizier Hassan, the Emir's chancellor, is present in the palace's throne room until he is moved to the Merchant district of Menaphos after The Jack of Spades. Osman, the emirate's spymaster, is also in the throne room. Prior to completion of Stolen Hearts, entering the palace is forbidden by the Emir. 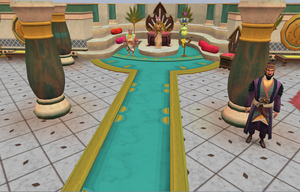 The entire place displays the wealth and power of the Emir. It is the largest and most impressive building in the city of Al Kharid itself, with many architectural details. The furnishings throughout the palace include intricate rugs, crown moulding, chaises, fountains, columns, etc. 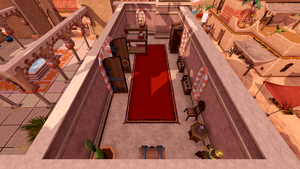 The eastern part of the ground floor. 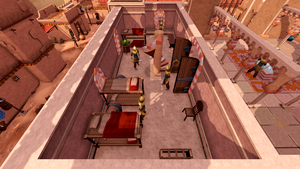 The western part of the ground floor.

The palace is built on a raised one-storey platform of sandstone, with steps in the north leading to the courtyard. Within the courtyard and the barracks are many Al Kharid warriors. They can also be pick-pocketed, by players level 25 Thieving.

The trough in the courtyard can be used as a source of water, where containers can be filled.

The east and west wings of the palace border the courtyard. These serve as the barracks for the warriors, with bunk beds, weapon racks, and other furniture present for their use. Each wing has one or two ornate chests that can be opened and searched, but no items are ever found in them. The west wing has spiral stairs leading to the 1st floor[UK]2nd floor[US] and a cabbage spawn, while the east wing has a jug of water spawn. The doors to the wings are permanently open.

The throne room makes up the entire southern part of the palace and is where Emir Ali Mirza, Khoochak, Osman, and Grand Vizier Hassan (until The Jack of Spades) can be found. Stairs here lead to the 1st floor[UK]2nd floor[US]. 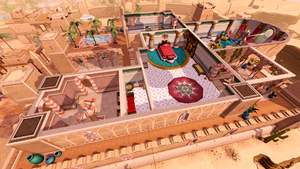 The first floor of the Al Kharid palace.

The interior of the 1st floor[UK]2nd floor[US] consists of a hall at the top of the throne room stairs, the Emir's bedroom, and the treasure room accessed by an ornate door within the bedroom.

Outside, there are two balconies to the southwest and southeast, and to the north there is an exterior walkway to the palace's east and west wings. On the east there is a large rectangular fountain carved into the floor surrounded by palm trees. Stairs leading to 2nd floor[UK]3rd floor[US] are on the walkway north of the bedroom and in the western wing.

During Stolen Hearts, the player navigates the rooftops of Al Kharid to the western wall of the palace's 1st floor[UK]2nd floor[US], accessed by a tightrope from the bank's roof. The player then climbs up the brickwork onto the palace roof. 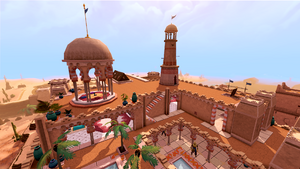 The second floor of the Al Kharid palace.

The 2nd floor[UK]3rd floor[US] is the roof of palace. A skylight allows views of the southern end of the 1st floor[UK]2nd floor[US]. Breaking into the treasure room via this skylight is part of Stolen Hearts.

Some vases and potted plants are in the northeastern part surrounding the tall ramada with a rug and cushions on the floor. An inaccessible two-storey tower stands on the southeastern part of the roof.

This information has been compiled as part of the update history project. Some updates may not be included - see here for how to help out!
Retrieved from ‘https://runescape.wiki/w/Al_Kharid_palace?oldid=35742832’
Categories:
Hidden categories: