Aksel's permission (sword) is an item received from Aksel in the Artisans' Workshop. Aksel will only give this if he appears in the burial armour area or the track making area and a player speaks to him. The player must have an inventory space free to receive the item before speaking to him, otherwise he will disappear without giving permission. 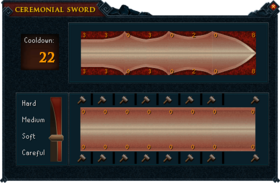 This information has been compiled as part of the update history project. Some updates may not be included - see here for how to help out!
Retrieved from ‘https://runescape.wiki/w/Aksel%27s_permission_(sword)?oldid=35647650’
Categories:
Hidden categories: