From the RuneScape Wiki, the wiki for all things RuneScape
< Airut
Jump to navigation Jump to search

Airuts are high level slayer creatures that provide very good combat and Slayer experience. A Slayer level of 92 is required to inflict damage on them. Besides experience, they drop Airut bones, Rune salvage, noted herbs, and noted resources which make them very profitable.

Airuts can be found either south-west of the Piscatoris fishing colony, just west of the Phoenix lair on the peninsula, in Kuradal's dungeon (only if assigned as a slayer task to kill them), or north of the Graveyard on Mazcab. The fastest way to reach Airuts on the peninsula is to use the fairy ring teleport (code: akq) and run west-southwest.

Airut use two combat styles, melee and ranged, the style used depending on which stance they are in. When meleeing, they stand on their hind legs and attack by punching. When ranging, they stand on all-fours and spit corrosive bile at the player. Airut prefer to exploit the weakness of the player and will switch between combat styles if prompted to do so (if the player changes armour or activates protection prayers).

Airuts have the unique property of increasing their defence as their health falls. This can make them slightly harder to kill, especially if using lower-tiered weapons.

In either style the Airut can initiate a brief berserk mode where they will deal inaccurate, but rapid and powerful damage to the player, continuing to use the same attack style as they were in at the time. This attack is signalled by the Airut beating its chest. It will use one arm for ranged and two arms for melee. This attack can be stopped by using the Rapid Fire or Flurry abilities anytime during the attack, depending on if you are using ranged or melee, respectively. It should be noted that to stop the attack the ability must hit; if no damage is dealt, the Airut will not be stunned and continue attacking. Take caution when using Flurry, as this is a multi-targeting attack. Alternatively, using a stun before the Airut begins this series of attacks will temporarily halt them, but will not prevent the attack from actually commencing once the stun is over. You can also use a root and step away from the frenzying Airut. This only works when the Airut is in its melee stance. Players must be careful when the Airut switch combat modes as the signal animation may not appear. If you start to receive rapid damage after a style change immediately use one of the abilities listed above to disable it.

When they are using their berserk mode and are successfully hit from one of the two abilities mentioned above, they will kneel and catch their breath. During this short time frame, the Airut will be stunned and all incoming damage on them will be doubled.

Melee is an effective method to kill Airuts with their high defence. Since their defence increases over time, it is not recommended to try killing them with any weapon lower than level 80, as it is very likely they will miss as a result.

Players will find that a full inventory of food won't be required to kill them as their shark drops should help heal any damage done to them. 4-5 sharks should be sufficient to start off with if players know how to kill them efficiently.

One effective method to reduce the amount of banking per trip is to use the Penance aura in conjunction with Soul Split and Turmoil. Airuts tend to deal enough damage to players so prayer will be restored. Players most likely won't need more than 2 to 4 prayer/super restore/super prayer renewal potions per trip.

If players use the melee method to kill Airuts, it is recommended that they attack those on all-fours since the ones standing on their hind legs have a higher defence against melee. When they pound their chest in this position, players should be using the Flurry ability to prevent potential massive damage from its corrosive bile. Players are encouraged to use dual wield weapons since two-handed weapons have no abilities to stop their special attack. Protect from/Deflect Melee in tandem with Devotion can also be used to nullify the damage taken from the special attack. One effective combo is to use Flurry to incapacitate them right after they pound their chest then use Decimate for a potential 5k+ hit.

If you don't have the stats to effectively melee Airuts, it's possible to safespot them. There is a big rock to the west of the Mazcab bank with a single airut spawn on the western most side. Using Magic or Ranged, attack them and run to the north side of the rock (being sure to stay pressed against it). The Airut will be stuck on the corner but you can still attack them. A better safespot exists in the rocks just north of the Phoenix lair near Piscatoris. There is a small chance that they will go into their ranged stance but provided you are using at least T70 armour you should be able to tank it fine.

The following tactics is applicable both for Ranged and Mage fighting the Airut without having to have the highest level gear.

The best place to fight the Airut is near the Piscatoris Hunter Area, near the Memorial of Guthix.

This area has two major advantages:

You need to have the following equipment to effectively fight: 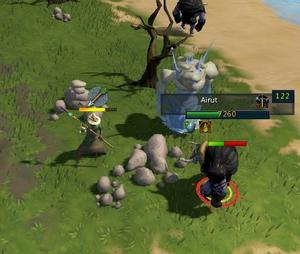 After reaching the site, find a nice boulder to hide behind. if you have a melee familiar, position it on the far side of the boulder between your boulder and the Airut.

Before engaging in combat, pray against Ranged.

Locate an Airut that is standing on two and attack it with all you have got, including special attacks of your familiar while praying against Ranged all the time.

When the Airut sees you praying ranged protection prayers, it will try to attack with melee, only to be blocked by the boulder. It can take up half its health in damage before switching.

After finishing it off, collect its drops, especially its bones and get ready for the next fight. When your backpack is full, teleport to the memorial of Guthix, bank your loot, load up with food and prayer potions and repeat.

Ranged is another method, although less popular than melee due to melee having more powerful thresholds compared to ranged. It is still a good style of combat against them as Rapid Fire will stun any berserking Airuts if it hits.

A shadow nihil is recommended when ranging to increase the accuracy of your attacks. The Reckless aura can also be used for a slight damage/accuracy increase, though you may take more damage while using the aura.

Airut can be safe-spotted using the rocks in the Piscatoris Hunter Area or between the prisoner cages on Mazcab and often don't immediately switch from Melee to Ranged attack mode meaning the player can deliver a decent amount of damage (often about half of the Airut's life points) before having to deal with damage from their Ranged stance.

The most common familiars that are brought to Airuts is mainly the Pack yak, as it provides the player a method to send their valuable drops to the bank. Some players bring Nihils instead, as they boost the player's accuracy to counter their increasing defences. If on a slayer task, a Nihil should be brought for very high accuracy, although magic notepaper will be needed if the player wishes to pick up any bones.