From the RuneScape Wiki, the wiki for all things RuneScape
Jump to navigation Jump to search
For one of the path objectives, see Adventurer's Log (achievement).
For the current version of the log, see RuneMetrics/Adventurer's Log. 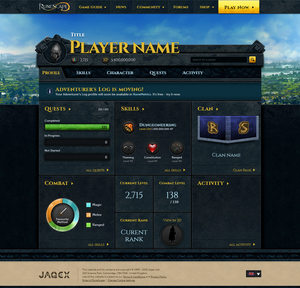 The Adventurer's Log is a members-only feature of the RuneScape website. It contains many functions that a player might find useful, including recent activity, quests recently completed, skills recently trained, and even notable drops recently obtained.

The Adventurer's log was first hinted at during a Q&A between players and Jagex staff posted on the forums.

On the 26 October 2009, an article appeared in the Knowledge Base called "Adventurer's Log", which was listed under "Customer Support & Other". It was later removed from the "Community" Tab, but it could still be accessed by the manipulation of a link. All profiles of Jagex Moderators were already set to private. The page could still be seen by a few players that had the URL because of players posting the link in the RuneScape Forums, but all links were shortly removed by Jagex Moderators. During several periods of the day it was being tested, the web page still had existed but retained no coding.

Mod Kat commented on the forums on the same day to say that Jagex had quietly released it to make sure that it was working properly, and then they subsequently removed access to it after they found out it was functioning properly.

On 27 October 2009, Mod Seb had confirmed on the RuneScape Forums that the Adventurer's Log was currently in beta.[3]

On 28 October 2009, the Adventurer's Log stopped working and instead gave the message: This account either does not exist or has never logged in to RuneScape. Please check the account name and try again. whenever a player's username was searched. This glitch was fixed a few hours later.

Officially, the feature was released on 18 November 2009,[4] but the feature is only for members.

On 11 May 2016, it was replaced with RuneMetrics, although the features and data itself were moved there as well and the existing features from the Adventurer's Log remain free for members.

Item drops from high levelled monsters such as God Wars dungeon bosses, Corporeal Beast, or from slayer monsters such as abyssal demons, and dark beasts also get displayed within the Adventurer's Log.

Individual players may change who can see their log by clicking on the "Settings" button. The available options are:

Players who have been banned, or who are not currently members, will not show on any log. The log initially suffered from performance issues, usually resulting in an error message or very slow page loads. As of August 2010 the performance issues have been solved and the log is responsive. 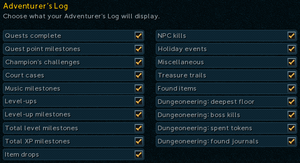 I won an Off-hand Lucky Armadyl crossbow on Treasure Hunter!