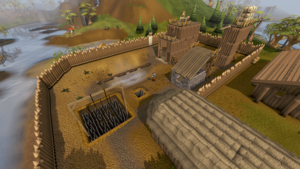 Once at the Barbarian Outpost, the player must pass by the barbarian guards (Bar Crawl requirement) and then crawl through a pipe (35 Agility requirement, boostable) to reach the actual Agility course.

On the basic course, all obstacles except for the obstacle net and crumbling walls are failable, and deal damage on a failed attempt. Additionally, failure on the Ropeswing or Balancing ledge require the player to climb back up to the obstacle's starting point to regain their position in the course. Completion of a lap without failing a single obstacle cannot be guaranteed until reaching 93 Agility (this can be by a boost such as that given by summer pies).

Each lap gives 174 Agility experience, including the bonus of 56.7 experience on the last obstacle, and may be completed in 30–45 seconds.

After the player has successfully completed 250 laps without failing any obstacles, he or she may talk to Gunnjorn to get the Agile top. The successful laps do not have to be consecutive and the counter is not reset if an obstacle is failed in a lap. The Agile top may be re-obtained from Gunnjorn if lost without completing an additional 250 laps.

The fastest possible time that a full lap can be completed in is about 37.2 seconds. It is possible to gain over 70,000 Agility experience per hour at maximum.

Click on the next obstacle while you are still completing the current one.

Get this right to save a game tick or two.

If you click on the wall jump at exactly the right time, you will run directly from the log to the wall without stopping. This is probably the most difficult time saver.

Once you are up to the next level, walk to the space just in front of the obstacle. This will allow you to move diagonally, instead of taking an L-shaped route.

Only click the obstacle itself when you are already moving, otherwise, your second command may supersede the first and you end up taking an L-shaped route anyway.

Run in front of the spring mechanism before you fire it, again waiting until you are already running to click on it, thus allowing you to run instead of walk. 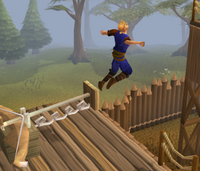 Have the Balance beam right clicked.

Right before the roof slide, move to the northmost side, then on the slide itself spam click Surge and you'll immediately move 10 squares forward as soon as you reach the floor. This saves a tiny bit of time, but it adds up.