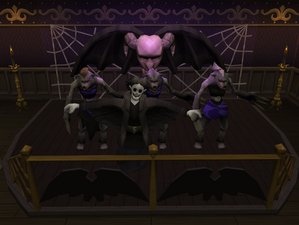 Adamantite Damsel is a famous rockband in the year 169, known for several famous songs, including Black Zabeth. The band first made its appearance in Gielinor at the 2010 Hallowe'en event, attracting many players.

The band consists of the lead singer Zabeth Corvid, of whom the Grim Reaper is a big fan, and background singers Helga, Greta and Moira (all 3 of whom are werewolves). During the Grim Reaper's party the spider Minstrel Web plays the instruments. It is revealed during the 2011 Hallowe'en event that Minstrel Web has split from the band, and goes under her new stage name Infinity.

During the 2010 Hallowe'en event, the player is asked to help prepare for a party for the Grim Reaper. Being a big fan of the lead singer Zabeth Corvid, Grim invites the band to play at his house.

During the preparations the player is asked to bring the background singers a bottle of Moonshine, help Ministrel Web find her lost spiders and to get an autograph from the lead singer for the Grim Reaper.

Afterwards the band plays its well-known song Black Zabeth, and the party turns out to be a big success.