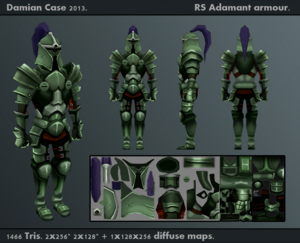 Adamant armour with what appears to be a higher quality texture. For example, the helmet has visible indentation or damage. This image was created by Mod Damo.

Adamant equipment is equipment stronger than mithril equipment but weaker than rune equipment. As with all adamant items, it has a dark greenish colour. This armour is heavier than any other equipment, even rune. Therefore, it is recommended to move on to rune armour as soon as possible. The armour has decent stats, despite its weight. It has an advantage because of the huge price difference compared to rune. Because of this, many people choose adamant armour over rune when they go to PvP areas.

Adamant weapons require an Attack level of 40 to wield, but specific weapons also require various other stats to use (the halberd, for example, requires 15 Strength).

Adamant armour (also known as addy armour or adam armour) is the third highest quality armour on the standard metal armour spectrum (bronze to dragon). Adamant armour requires 40 Defence to wear. Adamant armour also comes in silver and gold trimmed versions, both of which can be found from level 2 Treasure trails.

In the March 2012 Behind the scenes, it was announced that Adamant armour would receive a graphical update along with black-dragon equipment and various other armours. 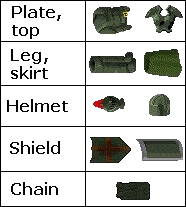 Trimmed and heraldic armour has the same bonuses as standard adamant armour, however it is more expensive. These can be obtained by members from Treasure Trails or for free players by buying in Grand Exchange.