From the RuneScape Wiki, the wiki for all things RuneScape
Jump to: navigation, search
For this item's augmented variant, see Augmented Balmung.
For other variants of this item, see non-achromatic, viridian, cobalt, crimson.
Achromatic Balmung? (edit)

The Achromatic Balmung is one of four Balmung upgrades as reward for completing the miniquest Koschei's Troubles. Unlike the Viridian, Crimson, and Cobalt Balmung, it was released two weeks later as a neutral colour. It is obtained by detecting curses on the gem or attempting to crush it during the miniquest and handing it to Kharshai to unlock a new memory. After enhancing the Balmung, one can right click and select "Toggle-colour" to remove the colour. The same process can be used to regain the colour. 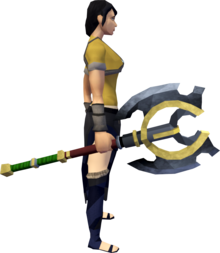 Unlike most Average-speed two-handed swords (including its original counterpart), upgraded Balmung uses a damage multiplier of

instead of the standard

. All versions of upgraded Balmung share this trait, effectively giving them an approximate