Players who abide by the rules will keep their accounts in the green zone.

Account Status is a system used by Jagex as a form of a disciplinary measure to record and display offences of a player. It can be accessed from the "Account" section of the RuneScape website.

Accumulating offences for violations of the Code of Conduct in-game and on the RuneScape Forums leads to temporary mutes or bans. Severe/continued violations can eventually result in a permanent mute or ban. Offences, their evidence, and subsequent punishments can be viewed and appealed by players using the Account Status system.

The risk of getting muted or banned is visually displayed on Mute and Ban Meters. Recorded offences progressively fill the coloured zones on the meters, called "Safe" (green), "Warning" (orange), and "Banned/Muted" (red). Severity of an offence contributes to increments in which the meters are filled.

Accumulated offences are shown below the account status meters. For every offence, the date, rule broken, punishment, and the status of the punishment is given. Some offences can be appealed, and sometimes the evidence (usually in a form of a plain text chat log, or a Jagex Moderator comment) is also available. Lesser offences usually expire after a year, after which their status reads "Expired", and they no longer affect the status meters. An offence can also get quashed by a Jagex Moderator.

The number of black marks associated with an account ranges from 0 to 10.
Main article: Black marks

Black marks were a disciplinary measure used by Customer Support to track the offences of a player. When a certain number was reached, the player could be muted or permanently banned. Players could track the number of black marks on their account by clicking "Appeal an Offence/Ban" in the account recovery section of the website, though they cannot appeal a Legacy punishment.

Black marks are no longer used to rate the offences of accounts. 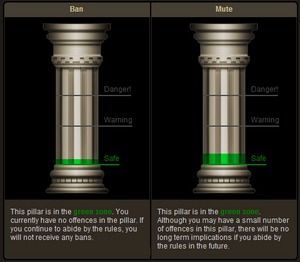 "Offence Pillars" found in the "Appeal a ban" section. 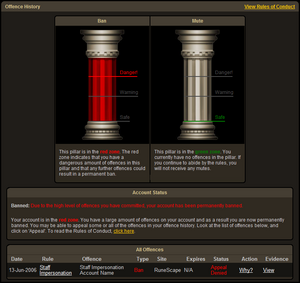 Players may be instantly banned for Staff Impersonation.

Replacing the old black marks system, offence pillars, one each for mute and ban, measured how much offence has been recorded on an account.

Parts of the pillars were coloured depending on the offences the player has made. The zones were labelled "Safe" (green), "Warning" (orange) and "Danger!" (red). The colour on the pillar would rise, depending on which rule has been broken. Having a pillar fully coloured could lead to a permanent mute or ban.

Both pillars contributed to an overall colour of an account. The coloured zones on the pillars would be reduced when an offence has been appealed and accepted, or when they expired.

Offence pillars are no longer used to rate the offences of accounts.