From the RuneScape Wiki, the wiki for all things RuneScape
Jump to navigation Jump to search
The Old School RuneScape Wiki also has an article on: osrsw:Accept Aid 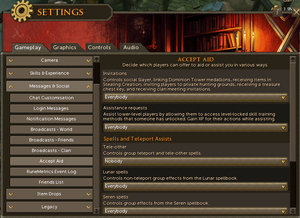 Accept Aid is an option within the Options interface under the Gameplay tab (Social subtab) that enables consent to various interactions from other players. Accept Aid is divided into seven categories and can each be toggled independently from each other. Players have the option to enable or disable certain actions completely or only allow friends and clan members to perform them.

Spells from the Magic skill take up the largest portion of actions that are affected by Accept Aid.

Tele-other and Tele group are a type of spell that allows players to receive prompts to be teleported to a certain location with the option to accept or deny the proposal. Enabling this setting allows players to receive these prompts. It is not recommended to have this setting enabled at all times and instead only be allowed to Friends & Clan or just remain disabled altogether. Some players may pester others with this spell by causing the prompt to pop up which can become bothersome when performing certain skilling or combat tasks that require the player's attention.

The Lunar spellbook is a heavily support-based spellbook and, as such, has many spells that go through the Accept Aid settings. Spells from this spellbook allow players to have their life points recovered, be cured of poison, have their stats restored or boosted, and several other generally beneficial effects.

Seren spells, like Lunar spells, are mostly supportive in nature and players can stand to benefit from their various effects. Benefits typically include forms of damage reduction and life point recovery.

The remaining settings are not spell-based and can also be toggled to the player's liking. They mostly concern sharing items and boosts and sending invitations.

The Assistance requests setting controls the option to send and receive requests regarding the Assist System, allowing players to borrow the levels of fellow players to perform otherwise impossible feats at the cost of the assisting player receiving all the experience for the action performed.

This setting deals with mostly harmless player interactions such as receiving a Lily of the valley, popping open a Glowing cracker, or joining a Capoeira dance.