From the RuneScape Wiki, the wiki for all things RuneScape
Jump to: navigation, search
The Old School RuneScape Wiki also has an article on: osrsw:Abyssal leech 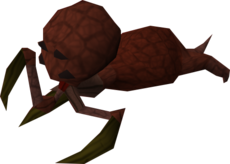 The abyssal leech is a monster that dwells in the Abyss, and also in the Abyssal Area (fairy ring code ALR). They do have high accuracy and can hit very quickly (attack speed of 8, around the same speed as dual wielded "fastest" weapons). They are the monster usually killed for pouches because they are the abyssal monster that has the fewest life points, though only by a small amount. On the flip side, however, their drop rate is the same of the monsters with tougher life points and defence.

It is not recommended to hunt these for pouch drops. Abyssal walkers are much easier to kill, because while wearing magic armour, you will consume less food from the melee attacks of the abyssal monsters. Players often train on Abyssal creatures for combat experience, which is one of the fastest methods of training in the game. Killing these for essence drops is not recommended as essence can be mined at a much quicker rate.

To hunt this creature in the Abyssal Area, place yourself in a corner so that they can only attack you one or two at a time. If you have 40 Prayer, bring a few Prayer potions and use Protect from Ranged. After that point hunting for pouches, charms, and various talismans is easier.

Training on them is not recommended but possible due to other monsters such as Abyssal walkers and Abyssal guardians that roam the Abyss and Abyssal Area. They have 2600 LP, extremely low defence, and are highly aggressive, allowing quick training. However, they will stop being aggressive after a while, just like the Abyssal guardians and walkers do. Once they become tolerant of you, all creatures in that half of the area (north or south) will become tolerant at once. To make them aggressive again, run to the other half of the area and run back.