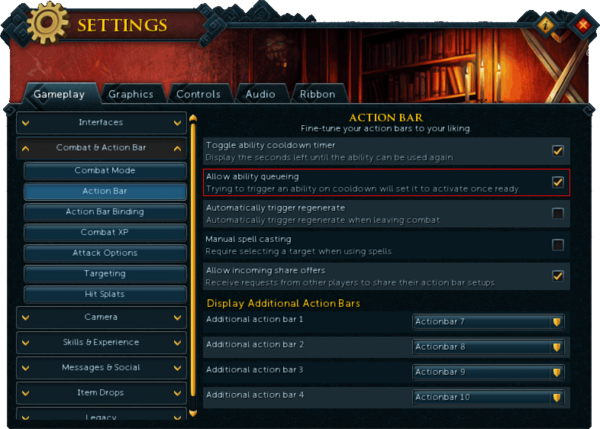 Location in the Settings for toggling ability queueing.

Ability queueing, also known as queueing, is a toggleable option found in the Settings interface under Gameplay → Combat & Action Bar → Action Bar. The in-game description is Trying to trigger an ability on cooldown will set it to activate once ready. This applies for abilities that are on their own internal cooldown as well as the global cooldown (GCD). In addition Magic spells such as Air Surge, Vulnerability, etc. can also be queued. Ability queueing can only occur by clicking/pressing an ability on an Action bar; abilities cannot be queued from the ability book.

, are queued. During combat, an ability can only be queued if the icon is present at least one game tick earlier before cast. If a player attempts to queue an ability to cast sooner than this, the ability will not be considered queued.

Ability queueing provides some additional effects, many of which are detrimental to the player.

A player experiencing movement stalling as a result of a queued offensive ability, Sonic Wave, being cast while clicking to try and keep moving.

A queued offensive ability (something that needs to interact with a target, typically able to cause damage) will always force the player to stop movement for casting the ability. This happens even if the player is spam clicking in an attempt to try to keep moving. The table below lists abilities that do not cause movement stalling.

Many queued abilities cast on the specific ticks behave differently compared to abilities that are not queued under the same conditions. These scenarios usually involve the queued ability being cast on the same tick as the player takes damage or the final tick of a buff provided to the player before it runs out. Some of these are also affected by revolution(++) attempting to trigger the ability.

Defensive abilities that are queued during GCD have the option to be queued on 3 different ticks before the defensive is cast and it is these ticks that determine whether or not the attack will be affected by the on-tick defensive cast. On-tick defensives that have the queueing symbol

appear over the defensive for 1 game tick before cast will not work.

If the queueing symbol appears over the upcoming on-tick defensive

If the player is 6 or more tiles away from the enemy, queued on-tick defensives will not work.

Because of this nature, it is possible for a player to be killed while casting a queued on-tick Resonance/Divert, Barricade, or Immortality because their respective effects do not apply on the specific game tick they are cast.

A player casting a queued Assault such that it is cast on the final game tick (tick 10) of the Greater Barge buff. Assault does not become a damage-over-time.

If ability queueing is enabled, certain abilities are not possible to cast without a target.

If ability queueing is enabled, ability stalling with Reprisal

to prevent adrenaline loss is not possible; instead, Reprisal will be/remain queued.

ability if the player has ability queueing enabled. These special attacks are:

With ability queueing enabled, one can lose a target by:

This is one of the few ability queueing specific interactions that can be beneficial to the player.

This interaction has been patched with an update on 29 March 2021.