From the RuneScape Wiki, the wiki for all things RuneScape
(Redirected from Ability bar)
Jump to: navigation, search
This article is about the interface component. For optimal/suggested bars for use with Revolution, see Revolution/Bars.

Each action bar has 14 usable slots that the player can fill with items or skills. By using these slots, a player is able to easily find and select an ability that they would want to use. To use these abilities, the player only needs to press the corresponding key in the corner of the slot. (Note: In order for these 'shortcut keys' or 'hotkeys' to operate, the [Always-On Mode] button in the upper right corner of the chatbox must be set to {Off}. Or on Legacy Interface Mode, right-click All in the chat box and select {Off}.) These keys start out as 1, 2, 3, 4, 5, 6, 7, 8, 9, 0, -, and =, but they can be changed by right clicking on the slot and selecting the "Customise Keybind" option, then selecting which key they would like to replace it with. The player can also just click on the ability's icon, to use the ability. The Quick Inventory slots (noted in the picture as having the keybind Z and X) by default are not bound to a key, these slots can be bound by the user under settings, or by right clicking. 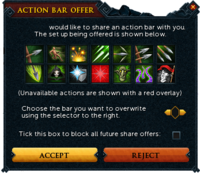 Players can display upto four additional action bars, apart from the primary action bar used for combat. Each bar will display one of those set up on the original bar, so these cannot be used to "save" more bars. Abilities placed on this bar can then be bound to hotkeys. Keybinds function exactly like the primary action bar.

The update history project is a work-in-progress – not all updates to this topic may be covered below. See here for how to help out!
Retrieved from ‘https://runescape.wiki/w/Action_bar?oldid=35229916’
Categories:
Hidden categories: