A Guild of Our Own (miniquest)

A Guild of Our Own (miniquest) is the third and final caper Guildmaster Darren Lightfinger will assign a player who has completed the Buyers and Cellars quest and the previous two capers, From Tiny Acorns and Lost Her Marbles.

Speak to Darren Lightfinger to start the caper. He wants to register the Thieves' Guild with the Guild Registry to make the guild become legitimate, but due to the large fees, asks the player to break in to the Registry and steal their funds in order to pay the registration fees.

Before moving on, make sure to purchase a lockpick and a blackjack from Dodgy Derek if you haven't already got the items.

Location of the Guild Registry

Find your way to east Ardougne. The Guild Registry is located in the south eastern section of the town; enter through the door with the vial of stench (a) in your inventory and the blackjack equipped. Pickpocket the Registrar to obtain a Cuckoo clock key to the cuckoo clock in the neighbouring room.

The next bit is time-gated and needs to be completed quickly. 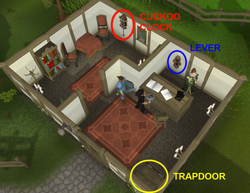 Location of the clock, lever, and trapdoor

If the Registrar returns to the main room before you enter the basement you will have to repeat the entire process. It may take a few tries to succeed.

As you enter the vault room, you can hear the Registrar ask the guard what happened. She will lock you into the vault to "stew for a while".

Pick the lock on the gates to enter the area with a large chest. This may take a few attempts. Make sure to right-click check on the registry strongbox to look for traps. Opening it straight away will trigger some falling rocks, taking damage up to 3300 lifepoints. Open the strongbox to obtain the bonds. To exit the vault, inspect the smallest box outside the vault area. 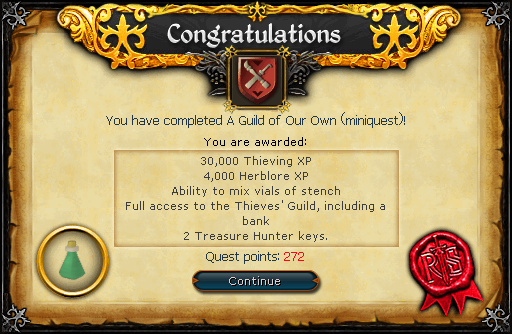