From the RuneScape Wiki, the wiki for all things RuneScape
Jump to navigation Jump to search
The Old School RuneScape Wiki also has an article on: osrsw:A Doubt 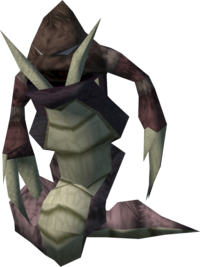 A Doubt is a monster that appears alongside the Inadequacy during the first battle of Dream Mentor. They represent the quest protagonist Cyrisus's doubts about combat. Though they can be fought and killed, it is recommended to instead focus on the Inadequacy, as all spawned Doubts will die once the Inadequacy is killed. If the player is using blood spells however, they can be used for easy healing.

Doubts also appear as a class C boss in the Dominion Tower minigame alongside the Inadequacy.

Turn auto-retaliate off whilst fighting The Inadequacy. Otherwise, players may start fighting the Doubts that are also attacking them. The Inadequacy has a higher max hit making a Doubt undesirable to attack. It's best to leave a Doubt seeing as they're highly inaccurate and do not hit very high.

This information has been compiled as part of the update history project. Some updates may not be included - see here for how to help out!
Retrieved from ‘https://runescape.wiki/w/A_Doubt?oldid=35657569’
Categories:
Hidden categories: