From the RuneScape Wiki, the wiki for all things RuneScape
(Redirected from A Christmas Warble)
Jump to: navigation, search

The 2009 Christmas event, officially titled "A Christmas Warble", was a RuneScape seasonal event released on 21 December 2009. The event's basic premise was that it was the player's job to go to the Land of Snow to free Santa Claus from a dark wizard who hates Christmas. The story of the event is loosely based on the traditional Christmas story A Christmas Carol. Unlike previous events, this one lasted three weeks instead of two. It was removed on 11 January 2010 with the news item "Nomad's Requiem." Rewards for this event included a new ghost costume, a wieldable candy cane, and a new emote. Snowballs were collectible during this event, but, unlike the ones from a snow globe, they could not be kept. This event was the first project developed by the Jagex Moderator Edam, who had recently started working at Jagex. 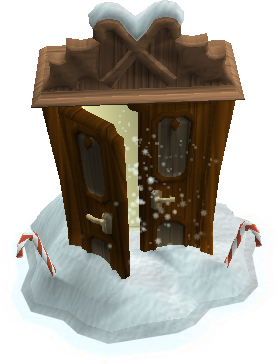 An entrance to the Land of Snow.

In Draynor, Falador, and Varrock, mysterious Christmas cupboards could be found, with a partygoer cheering next to each one. The partygoers reveal to players that the cupboards are entrances to the Land of Snow, where the Queen of Snow, Santa Claus's wife, is throwing a Christmas party and feast for all citizens of RuneScape. Upon entering through a Christmas cupboard, however, players find all the partygoers inside quite upset. They reveal to the player that a dark wizard who hates Christmas stole all the food for the feast, and kidnapped Santa Claus. The player meets up with a snow imp as a companion, who suggests the player talk to the Queen of Snow. When spoken to, the queen asks that the player rescue her husband and save Christmas.

When the player and the snow imp arrive at the house of Ebenezer Scourge, the dark wizard, they find Santa locked in a cage, and try to persuade Scourge to let him free. Scourge refuses, and reinforces his hatred of Christmas. The player's snow imp suggests that they try to scare Scourge into giving Christmas back. After looking around Scourge's house, the player finds some bedsheets and some chains, which they craft into a ghost costume.

The snow imp tells the player that information about Scourge's past is needed before they go on to scare him. The player talks to the Queen of Snow again, who reveals to the player that, in the past, she and Scourge were in love, but she eventually left him for Santa Claus because Scourge had become evil. The player, disguised as a ghost, confronts Scourge and tells him about his evil deeds of the past, and his relationship with the queen. Scourge is not fooled, and retaliates by trapping all of the partygoers in the Land of Snow in a bind. 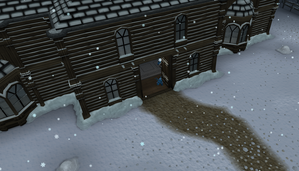 Ebenezer Scourge's house, where Santa had been kidnapped.

The player goes back down to the feast, and finds all the partygoers frozen within small, magical, glowing fires. The player learns that in order to free the partygoers, they must pour icy water on them in the reverse order in which Scourge cursed them. After freeing the guests, the player returns to Scourge, still disguised as a ghost. The player tells Scourge about how he has ruined someone's Christmas, and decides to bring the young partygoer Tiny Thom to Scourge. After the player's snow imp summons Thom to the house, Thom complains to Scourge about how he lost all his food and presents. Scourge becomes even more resentful towards the player, saying that Thom's brattiness only supports his cause. This leaves the player no choice but to leave Scourge again.

After talking with the player, the snow imp comes up with one more idea: since Scourge is uninterested in the past or the present, he must be concerned with his future. The player, still dressed like a ghost, goes back up to Scourge's bedroom, and, without speaking, dramatically points to a gravestone (conjured by the snow imp) that has Scourge's name on it. Fearing for his life, Scourge agrees to free Santa Claus and give back the food, and claims to now be a changed man.

The player returns to the feast to find everything back to normal, with Santa, the food, and the presents back. Santa, grateful that the player and his snow imp helped free him, rewards the imp with a scarf and the player with a very large candy cane. Ebenezer Scourge can be found enjoying the feast as well, saying that he is redeemed, and that he wishes the player a Merry Christmas. 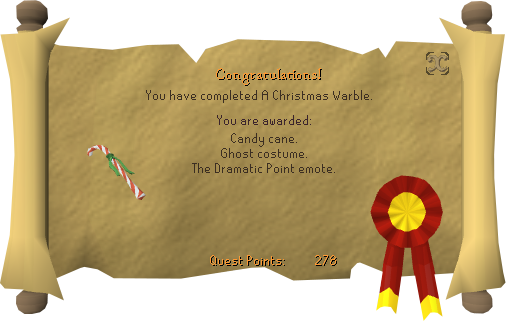 The following were rewarded to the player upon completion of the event:

Christmas Event Complete!
Plays after this event is completed.

Three music tracks were unlocked during this event. Players that did not participate in the event had these tracks automatically unlocked after the event ended.

These music tracks, along with every other music track released in 2009, were included in the 2009 RuneScape Awards poll (see below). 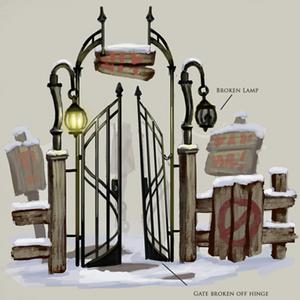 Concept art of the event.

The 2009 Christmas event was developed mainly in September and October of 2009[2] and was the first project developed by Mod Edam.[3]

Mod Edam based the story of the event on A Christmas Carol, a traditional Christmas novel written by Charles Dickens.

The Christmas ghost costume, a reward for the event, was not given an alternate form for female players, like the Santa and witch costumes. This was because that in the original novel A Christmas Carol, the Ghost of Christmas Yet to Come, which the Christmas ghost costume is based on, had no actual gender, and the developers believed that if the costume had one, it would have been less scary.[4]

Mod Edam wanted the rewards of the event to be so that they would not give any player any notable advantage over another, but would still be fun.

Particles, a graphical feature introduced during the event, in a Christmas Cupboard.

For the event, Jagex introduced a new particle system in RuneScape that included a more realistic look of snow. This was the first appearance of particles in RuneScape.[6]

The 2009 Christmas event was first announced in the news item "Christmas Cards and Blog."[7] In the developer blog, titled "Holiday Event: A Christmas Warble," Mod Edam gave a few details about what the event would be like. 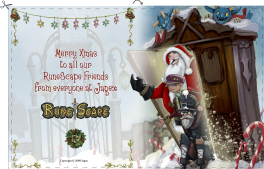 A Christmas card depicting Santa Claus, an old man, and a young boy.

Mod Edam said that new characters would be released with the event, but Jack Frost and snow imps, characters seen in the 2008 Christmas event, would have small cameos.[3] Santa Claus's appearance was confirmed by Jagex Christmas cards that represented the event. Mod Edam confirmed in the blog that the plot would be based on a traditional Christmas story, but he did not say which.[3] Upon the event's release, this was confirmed to be A Christmas Carol by Charles Dickens. 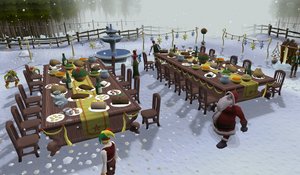 Upon completion of the event, NPCs invited players to take food and drinks from the feast table. The food, which was available nowhere else in RuneScape, consisted of mulled wine, yule logs, roast potatoes, and turkey drumsticks, each of which being able to restore one hitpoint (equivalent to ten life points today). (Another item, called a cooked turkey drumstick, was once available during the 2008 Thanksgiving event; however, there are differences between that and the turkey drumsticks available during the 2009 Christmas event.) The food was only able to exist in the Land of Snow, and it would disappear if a player attempted to take it out. With the removal of 2009's Land of Snow, the food became no longer available.[10]

One part of the event required the player to unequip their equipment. As this included members objects such as the Cape of Accomplishment, heavy criticism came from ex-members, who are unable to reequip members objects after they are unequipped. Despite overwhelmingly negative feedback, Mod Edam announced that the problem was unintended, but would not be changed. 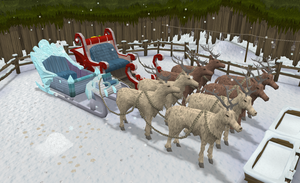 Santa's reindeer in the Land of Snow.