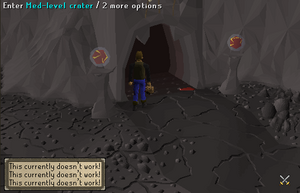 Bounty Hunter unable to be accessed, one of many dangerous areas that were closed off during the glitch

On 25 February 2009, along with a large update to RuneScape, a bug was discovered that crashed the game for players. This was done through the use of the Public chat, Clan chat, and Private chat feature. If players typed in the ALT code for the character "µ" (ALT+230 or ALT+0181), and entered it into the chat, it would cause the game client to crash for anyone who received the message (including the player themself), unless their chat was set to off. This was because the game couldn't display the aforementioned character, causing a fatal error for every client that tried to render it. The page would be redirected to a crash report page. This was abused by many players in dangerous areas, as well as the Grand Exchange in several worlds. Several precautions were taken in order to prevent players from being logged out due to this bug:

At 00:50 GMT, a server fix was announced on the official forums and was implemented soon afterwards. This update fixed the glitch, as well as re-opening the previously locked areas.