From the RuneScape Wiki, the wiki for all things RuneScape
(Redirected from 2021 Hallowe'en event)
Jump to navigation Jump to search
The Old School RuneScape Wiki also has an article on: osrsw:2021 Halloween event

The 2021 Halloween event features multiple Halloween miniquests and activities placed around Draynor Manor. Each miniquest has their own reward. The event runs from 18 October 2021 to 1 November 2021.

During the event many regular trees are decorated with some pumpkins on the ground around them and skulls hanging from their branches. A temporary bank chest can be found in the event area next to Death, and two Market Guards are defending the village south of ravenous skeletons. Event noticeboards were also changed (and in some locations added) to promote the event and offer teleports to the event area. The holiday portal in Prifddinas can also be entered to teleport to the event area.

The buff stacks with other experience boosts, but is applied separately before them, meaning that for instance with bonus experience the experience gains are multiplied by 2.24 with the full spooky time buff of 12%.

This buff is not available to Ironman Mode players.

There are three returning miniquests from the 2020 Halloween event: Death's, Pestilence's, and Death's dogwalker's. Players who have previously completed these miniquests will still have them completed this year and can access the respective activities right away.

Furthermore, there is a new miniquest for Luna.

None of these are technically miniquests, but are still referred to as such.

Speak to Death, asking how to help. He gives the player a polarising crystal. Interacting with the item reveals four locations in turn. At each location, the player must find (by interacting with the crystal again) fragmented souls and heal them. Clicking on the soul and remaining within range of it grants Divination and Runecrafting experience each game tick for 18 seconds (30 ticks) until the soul is fully healed.

Pestilence is located west of Draynor lodestone and south of Maggie's caravan. He tells the player that he requires "reagents" for the soup he is making, requiring 5 cabbages, 5 onions, and 5 potatoes.

After bringing him the items, Pestilence tells the player that they have to play the game of the ghosts. Head to the Lumbridge cemetery and talk to one of the ghosts. After going through the explanation, you will have the option to tell a joke and pretend to be scared. Talk to and select both options for each of the three ghosts:

The riddle is explained as follows:

Spook and Misty both lie, so their answers must be reversed, resulting in the following solution to the riddle:

After completing the riddle, the ghosts disappear and the player has to meet Pestilence again. After a conversation, Pestilence and the three ghosts can then be found in the west section of the Draynor Manor courtyard (see plague soup, an activity that awards Herblore and Cooking experience and spooky tokens).

Speak to Death's dogwalker in the eastern part of the Draynor Manor grounds, who explains that Death's one and only dog, Muncher, ran away into the manor during his usual walk. The dogwalker thinks Muncher has been hiding his bones inside the manor, but is too scared to go inside.

After finding the fifth bone, Muncher will appear behind the player in a cutscene. Leave the mansion through most south-eastern room and report back to the dogwalker, who is relieved that the player has brought the dog back.

However, now a new problem has arisen: there's no dog treats left! Death's dogwalker then proceeds to give the player a spade and asks the player to dig around the graveyard area near him for small doggy bones. The spade will give off heat messages indicating the distance to the location of the bones, listed below.

Speak to Luna in the south-eastern part of the Draynor Manor grounds. She will tell you to speak with Ed and Greg to help them out. After completing both Ed's and Greg's miniquests, return to Luna to receive 1,000 spooky tokens.

Ed is located in the north-eastern part of the Draynor Manor grounds. Upon speaking to him he will tell you to go and speak with Greg, who will then ask for six raw shrimp (obtainable at the small fishing net fishing spot south of Draynor Village bank). Return with the shrimp and Greg will cook them for you into sea monster bait. Take the bait back to Ed and he will need you to attack the sea monster using the nearby cannons. When a kraken tentacle appears in one of the three lanes, fire the corresponding cannon. After successfully firing at 15 tentacles, the sea monster disappears. Talk to Ed to complete the miniquest.

Greg is located in the south-western part of the Draynor Manor grounds. Upon speaking to him he will tell you to go and speak with Luna, who gives you Luna's compass. Select the "track" option and a red sphere will shoot out, guiding you towards a discarded sword hilt and a discarded sword blade. Take these to Greg who repairs the sword and asks you to kill 20 ravenous skeletons to the south-west of where Greg is standing. After killing the skeletons two more abilities will get unlocked and Greg will require you to kill 50 more skeletons in the nearby area. Finishing this unlocks the Arteria cosmetic which overrides the appearance of two handed weapons.

There are several activities you can play to acquire spooky tokens after completing the corresponding task.

An activity that is run by Death, located in Draynor Manor courtyard. The Death miniquest must be completed first; otherwise the fragmented souls do not show up.

The objective of the activity is to help the four fragmented souls travelling around the courtyard in clockwise direction.

Every 30 helpings, 16–19 spooky tokens will be awarded. With double-surge, bladed dive, and mobile perk, around 2,730 tokens can be collected per hour. The most click-effective way to gain tokens is to stand in a corner and siphon a soul as it comes into the screen, around the corner, and out of sight. The next soul will come along quickly and this way the player can stand in one spot while gaining tokens at a high rate.

Helping a soul and remaining within range of it grants Divination and Runecrafting experience scaled to your levels in these skills each game tick until the soul travels too far.

The following tables list experience rewarded in a single unboosted action when helping the fragmented souls at different skill levels. 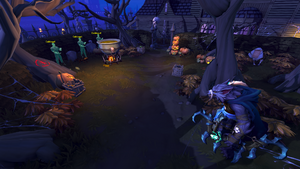 Pestilence watches plague soup being made.

An activity that is run by Pestilence, located in Draynor Manor west of where Death stands. The Pestilence miniquest must be completed first; otherwise the crates are empty and can't be used to participate in the activity.

The objective of the activity is to prepare 25 of each vegetable variant by using the three crates placed around the area and hand them in at the cauldron. The Crate of Cabbages yields prepared cabbages, the Crate of Onions prepared onions, and the Crate of Potatoes prepared potatoes. The process can be optimised by preparing the crates that the three ghosts by the cauldron are yelling. Preparing a crate that isn't being yelled by the ghosts will grant one vegetable at a time, and preparing the crate being yelled by the ghosts will grant three vegetables at a time.

The yelling of the vegetable changes every 30 seconds, and is repeated every 6 seconds. The orders always follow the order "cabbage, onion, potato", repeating infinitely. Preparing at any crate causes the player to continuously prepare the vegetables in 1.8-second intervals. Each portion of 75 vegetables (must have 25 of all three types) added to the cauldron will grant the player 53 spooky tokens per hand-in, and as many as possible portions are handed in in one action. By following the orders, approximately 3,816 tokens can be collected per hour, while not doing so yields approximately 2,356 tokens per hour.

is the experience for one action and

is your level in the skill.

The following tables list experience rewarded in a single non-boosted action when preparing any of the crates. 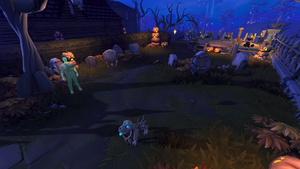 Muncher and the dogwalker in the graveyard.

The objective of the activity is to use Muncher's spade to dig around the graveyard area near Death's dogwalker for small and big doggy bones for treats for Muncher. The spade gives off heat messages indicating the distance to the location of the bones: "Ice Cold." (more than five tiles away), "Cold." (3–4 tiles away), "Hot!" (two tiles away), and 'So close!' (one tile away). Once found, hand the bones to the dogwalker to obtain the reward.

Finding either kind of bones gives Archaeology and Mining experience scaled to your levels in these skills.

The following tables list experience rewarded for finding either type of bones at different skill levels. 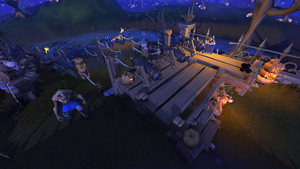 An activity that is run by Ed, located at the north-east corner of Draynor Manor. Ed's miniquest must be completed first; otherwise the sea monsters do not appear and the cannons cannot be used.

Firing a cannon grants Hunter and Fishing experience that scales to your levels in those skills. This activity doesn't yield equipment experience in Fishing. 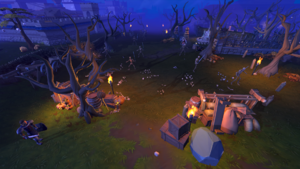 An activity that is run by Greg, located at the south-west corner of Draynor Manor. Greg's miniquest must be completed first; otherwise the player cannot interact with Arteria to kill the skeletons.

The objective of this activity is to use the four minigame abilities unlocked during the miniquest to quickly defeat the ravenous skeletons that spawn in the area. These skeletons are instanced per player. There are a total of 12 skeletons, and all skeletons respawn instantly if and only if every single skeleton has been killed.

Killing all the skeletons of a wave grants 13 tokens and respawns a new wave. Only casting Annihilate every 28.2 seconds grants approximately 1,660 spooky tokens per hour. Manually killing one wave between each cast of Annihilate grants approximately 3,319 tokens per hour. Delaying the casting of Annihilate to manually kill two waves between each cast is only worth it if the player can kill two waves within 42 seconds. 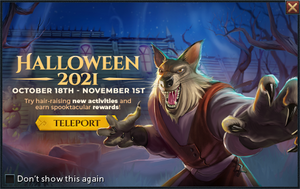 The event pop up.

Daily rewards can be claimed through the Halloween Daily Rewards interface that is opened automatically upon logging in for the first time of the day, provided that there are no other interfaces opening automatically, or by talking to Death in Draynor Manor grounds.

The daily rewards are not available for Ironman Mode players.

The following rewards are available: 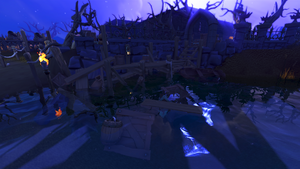 Purchasing all of the below costs a total of 21,000 spooky tokens.

Purchasing all of the below costs a total of 39,000 spooky tokens.

This information has been compiled as part of the update history project. Some updates may not be included - see here for how to help out!
Retrieved from ‘https://runescape.wiki/w/2021_Halloween_event?oldid=35946648’
Categories:
Hidden categories: