From the RuneScape Wiki, the wiki for all things RuneScape
Jump to navigation Jump to search
The Old School RuneScape Wiki also has an article on: osrsw:2015 Hallowe'en event

Gauntlet of Souls was the 2015 Hallowe'en event, which focused around a battle between Icthlarin and Amascut in the Grim Underworld. It began on 27 October at 00:00 UTC and lasted two weeks. Players had to help Icthlarin guide souls across River Noumenon to the afterlife.

Players would earn Noumenon Favour by gathering Wayward souls around the river on a boat, escorting them past Soul Devourers, finding Lost spirits and defeating the Avatar of Amascut.

The entrance to the event.

The event could be started by entering the soul rift by Death (or Frank) near the Burthorpe lodestone. Once in the Underworld, you could speak to Ka for further information about the event. She explained that Icthlarin needs help gathering lost souls from the River Noumenon, which could be sailed across from either one of the two piers. Once 20 souls have been gathered they needed escorting across the bridge, with the player's protection from Soul Devourers.

Pets and familiars were not allowed in the Underworld, the Lodestone Network could not be accessed from it, and both hands had to be empty to operate the boats. The Underworld could be exited by entering the beam just north of Ka.

Players could gather Wayward Souls on the River Noumenon by embarking on one of the two jetties (located south-east and south-west of the bridge), to set off sailing on a boat. At least 20 souls had to be gathered before they could be escorted across the bridge. Rescuing a soul awarded 5 Noumenon favour each. The text at the top of the screen informed the player how much Noumenon favour they had, and how many more souls they had to rescue (as well as in the chat box).

The number of souls gathered would reset if the player went to the lobby or logged out.

The belongings of long pass adventurers have been spotted beneath the surface of the river.

Bubbling water could be found on the river. Searching it gave the player an Adventurer's chest, which could be opened for various rewards. There was a time limit between searching for chests, as well as a limit of 5 per day. 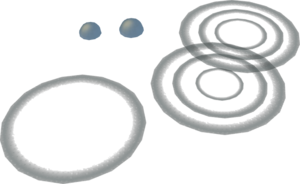 As you rescue the soul you notice another soul that stands out from the rest.

Occasionally, Special souls spawned whilst rescuing a normal soul. These souls were gold in colour, and awarded experience in a specific skill. Each day there were 5 skills which they could award experience in, which could be checked at the Ferryman or Death/Frank.

Note: The daily skills and the souls the player actually received varied. This was presumably unintentional. For a list of which skills were available on previous days, see special soul.

The bridge across the River Noumenon, filled with Soul Devourers.

Once at least 20 souls have been gathered, players could travel to the soul meeting point at the southern end of the bridge to guide the souls across it.

Throughout the bridge, you could find several of Amascut's Soul Devourers. There were three waiting points across the bridge, at which the rescued souls would stop until 5 of the soul devourers were defeated.

As the devourer expires an undigested soul escapes from its remains.

Occasionally, souls were set free to wander the bridge if defeating the devourers took too long.

Once all three waiting points had been passed, the rescued souls travelled over to Icthlarin to be escorted into the afterlife, which granted a reward of 300 Noumenon favour. 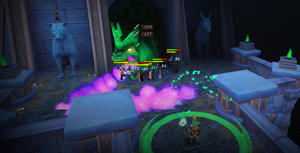 Players fighting the Avatar of Amascut.

The gates to the Underworld have been opened. Amascut's Avatar must be defeated!

Approximately every 15 minutes (starting from the last time it was defeated), the Avatar of Amascut, and Amascut herself, would appear at the gates to the afterlife, on the northern end of the bridge. The avatar was level 112 with 850,000 life points, and attacked using Magic. A bar at the top showed how much health it had remaining.

Icthlarin helped the players fight back against the avatar, but the four braziers around the area had to be kept lit. Upon defeat, 400 Noumenon favour was awarded. A soul devourer death animation was also rewarded after the first time defeating it. It should be noted that there seemed to be a minimum amount of time between kills. World hopping to try and get fast points did not work as the player would have received 0 points for the kill.

If a player died in the Underworld, when fighting the soul devourers, the Avatar of Amascut, or otherwise, they would have respawned at the soul meeting point with all of their items.

A player worshipping at the ectofuntus in the Underworld.

An Ectofuntus could be found at the southern end of the Underworld, alongside Necrovarus. There was a bone grinder to the west of it, and a pool of slime could be found to the south-east, for buckets of ectoplasm.

On the surface world, skilling occasionally (twice per day) resulted in a Lost spirit appearing. It granted XP in the skill of the player's choice and could be returned to Sinn Derkwill in the Underworld for 100 Noumenon Favour.

Rewards were bought for Noumenon favour from Sinn Derkwill. The XP lamp was a small lamp.

A soul devourer death animation was rewarded after the first time the player defeated the Avatar of Amascut. It can be used to override any current death animations by talking to Death or Frank in his office. 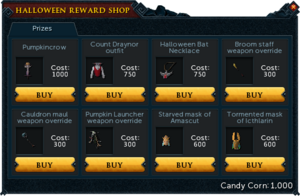 During the event, there was also a Hallowe'en-themed Treasure Hunter promotion occurring, with Candy corn as currency.