Haunted Houses was the 2012 Hallowe'en event. It is a community-based event, where players must pick a side to hunt ghosts haunting houses in RuneScape. Players could start the event in the Varrock Square or Falador Park by talking to either Brother Righteous for Team Righteous or Brother Heinous for Team Heinous.

There are ghosts haunting the houses of RuneScape, which you must find. Players can get hints for the locations of the ghosts by talking to either one of the monks, Brother Righteous (white) or Brother Heinous (red). Up to five ghosts can be found per wave and the locations will reset every two hours. You will receive a notification in the chatbox when the next wave begins. Before every wave, it is required to check in with the monks either in Varrock or Falador and start a hunt.

Once a ghost is found, it can be dismissed, rewarding the player with 10 ectoplasm that can be spent on various rewards in the Hallowe'en Reward Shop. Robes pieces cost 25 ectoplasm each and an ectoplasmator may be purchased after purchasing all of the robes for 50 ectoplasm. An ectoplasmator provides Prayer experience when killing ghosts, in a way similar to a bonecrusher.

Every ghost dismissed earned the player 10 ectoplasm, thus a maximum of 50 ectoplasm could be gained per hunt. Each piece of the robes costs 25 ectoplasm, while the ectoplasmator costs 50.

All rewards can be stored in the toy box of a player-owned house.

All rewards, with the exception of the cloaks, are members-only. If you are Free-to-play, you only get the choice of the cloak when you select the option *Shop*. The robes can be switched freely between hallowed and unhallowed versions. The ectoplasmator can only be bought while wearing the full set of robes.

A total of 200 ectoplasm points is needed to unlock all of the rewards. This means a member has to complete at least four games. F2P users are only rewarded with a cloak and, ergo, only have to play one game to unlock all available rewards.

The Ectoplasmator is also a very rare drop of a number of monsters, including Aberrant spectres, Banshees, and Ghosts. 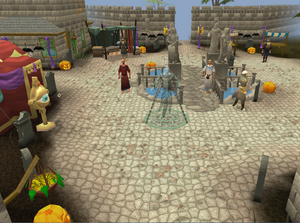 Varrock during the event. 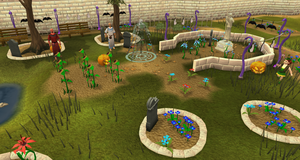 Falador during the event.