From the RuneScape Wiki, the wiki for all things RuneScape
(Redirected from 2011 Thanksgiving Event)
Jump to: navigation, search

The 2011 Thanksgiving event (also known as Turkey Protest) was the holiday event released on 22 November along with a new look for the website. The event was first mentioned in the November 2011 Behind the Scenes.

There were also a large amount of level 5 Angry Turkeys gathered outside the north-west entrance of Falador. The turkeys dropped bones and either a Raw turkey or a Raw turkey drumstick. They also dropped Cornucopias as a rare drop.

To start the event, players had to talk to Captain Turkerton in the Cooks' Guild. Turkerton wanted turkeys to be removed from the Thanksgiving menu and asked you to go to King Roald, located on the ground floor of Varrock Palace.

Go to King Roald and he will give you a shopping list to get supplies for an Alternative Thanksgiving Feast Shopping List. The list will contain all the ingredients required for an alternative meal:

Speak to the people above to have the supplies delivered to the king, bringing the shopping list to do so. Then speak to King Roald. He will tell you to tell the turkeys that "the turkey protest demands have been met".

After you complete this section, the shopping list will be destroyed. 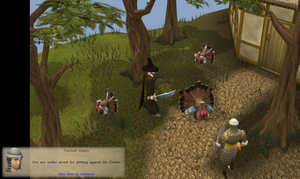 Return to Captain Turkerton, he will reward you with the turkey crest and the Give Thanks emote (if not already unlocked). A Guard will then approach to arrest the Captain - the Captain will be executed for plotting against the Crown, unless someone will speak in his defence. You will have to choose to vouch for him or not.

Finally, Mackers will approach you and, if you are a member, ask to come along with you. If you are a free player he will take farewell and search the world for cake. 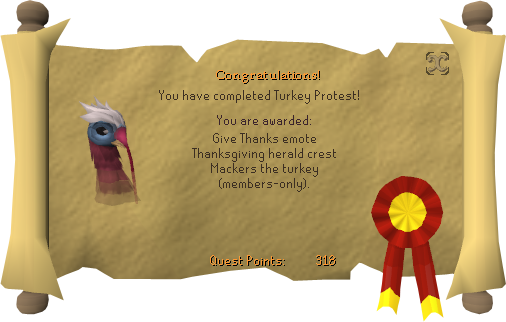