The 2005 Hallowe'en event saw the first introduction of the Scared emote, the Grim Reaper event upon dying, and the zombie head unique discontinued item.

A passive group of zombies visited the Lumbridge Swamp on 31 October 2005. Some of them had an "insult" option on them. Insulting a zombie would cause him to take off his head and drop it on the ground, leaving a headless Most of a Zombie behind. If players caught the rolling head, it would be theirs to keep. The non tradeable zombie head can be talked to, and held up in the air as an item triggered emote. A player can recover their lost zombie head by digging in the Lumbridge Swamp with a spade, talking to Diango in Draynor Village, or by searching their toy box in their player-owned house's costume room.

Other zombies had a "scare" option on them. Attempting to scare these zombies would cause them to break in half into a Half-Zombie and Other Half-Zombie, and then put themselves back together again, causing the player to become scared and learn the scared emote for use after the event.

The children of Lumbridge enjoy playing "trick or treat" with adventurers. Players can talk to them and choose to either "trick" them (attempt to scare the child) or "treat" them (give them an amount of coins chosen by the player).

If players used the "trick" option, they would automatically use their zombie head to scare the child into dropping some sweets on the ground. Sweets could be consumed (triggering a new emote that causes players to imitate a train engine) or given back to the children with the "treat" option. Uneaten sweets melted into chocolate dust after the event left the game, and many players took advantage of the opportunity to stock up on this scarce product. 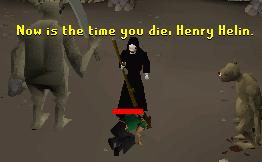 A player playing with the zombie head awarded at the 2005 Hallowe'en event.

Upon dying, all players would be visited by the Grim Spectre of Death. He would say a short line, then briefly drag the dead player with his scythe. The player would then suffer a normal death with whichever penalties were in effect for that area.

This information has been compiled as part of the update history project. Some updates may not be included - see here for how to help out!
Retrieved from ‘https://runescape.wiki/w/2005_Hallowe%27en_event?oldid=35634512’
Categories:
Hidden category: