From the RuneScape Wiki, the wiki for all things RuneScape
Jump to navigation Jump to search
The RuneScape Classic Wiki also has an article on: classicrsw:2003 Hallowe'en event

During the 2003 Hallowe'en event, untradeable scythes were dropped. The drop happened on two days; on 31 October and 2 November 2003. Players could only own one scythe at a time. If they tried to pick up another one while a scythe was in their bank or inventory, a message said: "You already have a scythe you don't need another one". Some players found out they could drop their untradable scythe (destroying it) to pick up a new one, making it much rarer than it could have been. If dropped or lost after the event, players could talk to Thessalia in the Thessalia's Fine Clothes shop in Varrock to get the scythe back.

Due to timezone differences between the UK and North America, many North American players missed the drop. Jagex organised a second drop day where every hour for four hours the scythes were randomly dropped.[4] One of the drop location took place around the Al Kharid mine area. 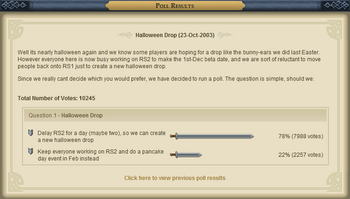 A poll on the Hallowe'en drop.