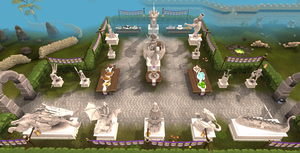 The Statues in the Garden.

The 15th year anniversary party garden was a small plaza located north-east of Falador that housed the 15 plinths and statues symbolising each year of RuneScape.

During the original celebration event, Party Pete and Fame, as well as four buffet tables, a birthday cake, and a bank chest could be found in the parklet. They were eventually removed, leaving only the garden and statues up for the duration of 2016, being eventually relocated to anniversary island at the beginning of 2017, as Fame wanted to preserve the statues.