From the RuneScape Wiki, the wiki for all things RuneScape
Jump to navigation Jump to search
The Old School RuneScape Wiki also has an article on: osrsw:1337sp34kr
1337sp34kr? (edit)? (edit) 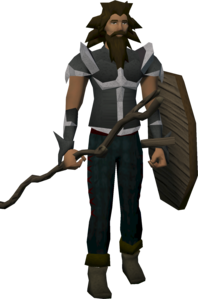 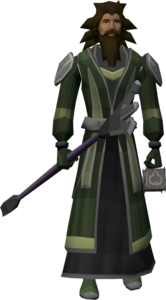 1337sp34kr is a non-player character and a player spoof. He is among those seen in the security footage of the Draynor Bank Robbery, in which he is quickly defeated by the Wise Old Man. He is level 63 and wears a skeletal top, mirror shield, rock-shell gloves, and a slayer's staff.

Before the removal of Gnomecopters, he also appeared in the tour of the Rellekka Hunter area, hunting sabre-toothed kyatts with the same level and outfit as in the bank robbery.

Finally, he appears in a cutscene during Salt in the Wound, in Daemonheim alongside Elfinlocks and Qutiedoll. After Elfinlocks is killed by Ezekial Lovecraft, 1337sp34kr decides to sell the gatestone on the Grand Exchange and leaves the dungeon with Qutiedoll. In this cutscene, he wears a set of Ecto equipment, a catalytic staff, and a celestial surgebox. 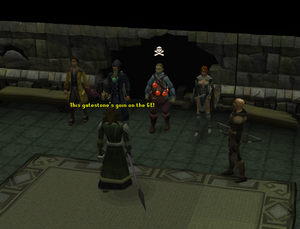