From the RuneScape Wiki, the wiki for all things RuneScape
Jump to navigation Jump to search
The Old School RuneScape Wiki also has an article on: osrsw:10th Squad

The 10th Squad is a military unit of the gnomic Royal Guard commissioned by King Narnode Shareen as an elite group of soldiers. They were recently stranded on the dangerous island of Ape Atoll. 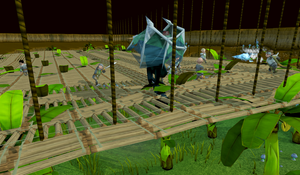 The Squad in action.

The 10th Squad, loyal to King Narnode Shareen, were ordered to oversee the decommissioning of a large Ship Yard in eastern Karamja. The shipyard was being used to create a fleet of over 500 ships that were going to be used to invade the human kingdoms of Misthalin, Asgarnia, and Kandarin under the orders of the anti-human extremist, Glough, possibly in connection with Arposandra. Unfortunately, their expedition was blown off course by strong southerly winds and they were forced to crash land their gnome gliders upon the appropriately named Crash Island. They then ventured onto Ape Atoll, where most of them were captured by the dangerous monkeys that inhabit the island.

The 10th squad features in the Monkey Madness quest where players are asked, by the gnome king, to investigate their disappearance. After the player has found and assisted them in their reconnaissance of Ape Atoll, Sergeant Garkor, the squad’s leader, will award players an honourary membership of the 10th squad and present them with a 10th squad sigil. This sigil must be equipped in order for players to fight, with the assistance of the squad members, a level 70 jungle demon and by doing so complete the Monkey Madness quest. Wearing the 10th squad sigil after the quest will not take you to the fight.

Upon completion of the quest, the 10th Squad remains on Ape Atoll, where they are investigating the monkeys and their king, Awowogei, and possibly freeing their members from prison.